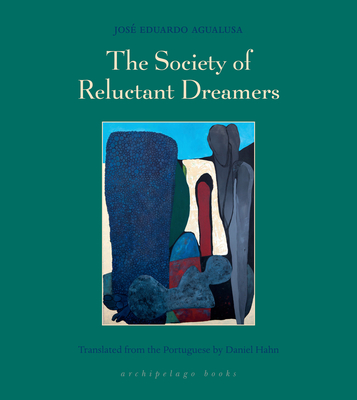 By Jose Eduardo Agualusa, Daniel Hahn (Translated by)
$18.00
On Our Shelves

Splitting through the clear waters beside the rainbow hotel, Daniel Benchimol finds a waterproof mango-yellow camera and uncovers the photographed reveries of a famous Mozambican artist, Moira. In this exquisite new novel, Agualusa's reader loses all sense of reality.

In The Society of Reluctant Dreamers, Daniel dreams of Julio Cortázar in the form of an ancient giant cedar, his friend Hossi transforming into a dark crow, and most often of the Cotton-Candy-Hair-Woman, Moira, staring right back at him. After emails back-and-forth, Moira and Daniel meet, and Daniel becomes involved in a mysterious project with a Brazilian neuroscientist, who's creating a machine to photograph people's dreams. Set against the dense web of Angola's political history, Daniel crosses the hazy border between dream and reality, sleepwalking towards a twisted and entirely strange present.

José Eduardo Agualusa (born 1960) is an Angolan writer. He studied agronomy and forestry in Lisbon before starting his writing career as a poet. His novel Creole was awarded the Portuguese Grand Prize for Literature, and he received the U.K.'s Independent Foreign Fiction Prize for The Book of Chameleons. In 2017 he and his translator, Daniel Hahn, won the Dublin Literary Award for A General Theory of Oblivion. About the translator: Daniel Hahn is the author of several works of non-fiction, including the history book The Tower Menagerie. He is the editor of The Oxford Companion to Children's Literature and one of the editors of The Ultimate Book Guide, a series of reading guides for children and teenagers - the first volume of which won the Blue Peter Book Award. His translation of The Book of Chameleons by José Eduardo Agualusa won the Independent Foreign Fiction Prize in 2007. He has also translated the work of José Luís Peixoto, Philippe Claudel, María Dueñas, José Saramago, Eduardo Halfon, Gonçalo M. Tavares, and others.

"False memories and clairvoyant dreams combine in Agualusa’s sweeping, intricately plotted tale of personal and political history in Angola...While the dense and tangled story, rife with diary entries, recounted personal histories, and thinly drawn tertiary characters, is almost too short for its own good, Agualusa manages to pull off a deeply satisfying ending...(a) populous, multilayered commentary on the fogs of love and war." — Publishers Weekly

"Past, present, and future mesh, setting the stage for a beautiful and chaotic novel on the trials of midlife crisis amidst revolution . . . Agualusa’s concerns are united in a harrowing and magical apex of resistance." — Cam Lind, Full Stop

"A nimble investigation into the liminal spaces between collective unconscious, lived experience, and political reality, The Society of Reluctant Dreamers is an epistemic jaunt through postcolonial Angola. I enjoyed every moment of this stirring and surreal book." — Katharine Solheim, Words Without Borders

"For Angolan novelist José Eduardo Agualusa, his country’s history has been a wellspring of both inspiration and ambivalence...His latest novel to be translated into English, The Society of Reluctant Dreamers, follows the country’s fortunes into the recent past, which are less violent [than during the Angolan civil war] but hardly peaceful...For Agualusa, the uncertain moment offers a perfect context to tell a story steeped in uncertainty, swimming in dreams." — Mark Athitakis, On the Seawall

"It's a winning novel, a fundamental ebullience simmering under the story and then coming out full force...An enjoyable read, and interesting glimpse of contemporary Angola." — M. A. Orthofer, Complete Review


Praise for A General Theory of Oblivion:

"Hahn is one of our most experienced translators. Such experience shows in tiny interventions to guide the English reader through the chaos of the Angolan battlefield ... and in his taking confident ownership of certain descriptive passages, ensuring the music of the original is conveyed along with the meaning... a timely homage to the prize of Angolan independence." -- The Independent

"Agualusa's novel is a powerful examination of personal recollection and public upheaval, and a penetrating study of isolation and the cost of freedom." -- Malcolm Forbes, The National

"Like Portuguese writer Fernando Pessoa and Argentine Jorge Luis Borges, Portuguese-Angolan writer José Eduardo Agualusa is a literary trickster who dazzles with his artificial fictional creations.... Agualusa is a master of varied genre structure, and he has great fun shifting from spy novel to pastoral narrative to interior reflection, but his heart is deeply invested in his characters, and each individual's story burns itself into the reader to make us reconsider our capacity for empathy and understanding.... Profoundly satisfying." -- David Wiley, Minneapolis Star Tribune for A General Theory of Oblivion

"Agualusa's writing is a delight throughout, as he opens up the world of Portuguese-speaking Africa to the English-speaking community - and what a world it is." -- The Scotsman

"'A man with a good story is practically a king.' If this is true, then Agualusa can count himself among the continent's new royals." -- Angel Gurría-Quintana, The Financial Times

"A master storyteller...It's a tribute to Agualusa's storytelling that the bittersweet redemption found by his characters feels authentic; he and they have earned it." -- Washington Independent Review of Books